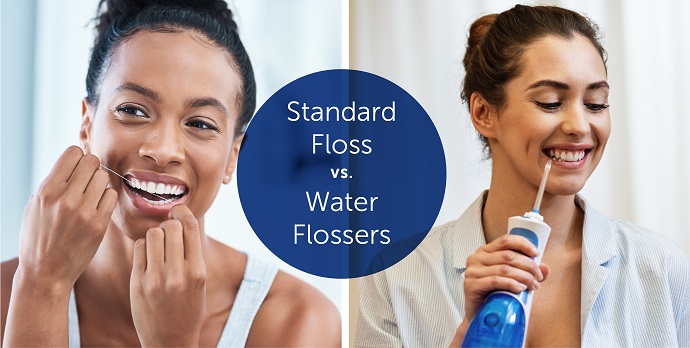 Most people know to practice healthy oral health habits, such as brushing twice a day and flossing daily. However, many people have questions about whether water flossing is a better alternative to traditional flossing. It’s important to understand each technique to help determine which is the better fit for you.

Standard flossing is a simple process that uses a thin, soft piece of string to pass between teeth, gently scraping up and down to remove plaque and food particles from teeth and out from under gums. Another option is a floss pick – a plastic tool with a u-shaped end that holds a small piece of floss. There are several advantages to standard floss and floss picks:

Despite the pros to flossing, there are a few cons:

Water flossing, also known as water picking, utilizes a special device that pulsates a thin stream of water into the mouth and around the gums. Rather than scraping the teeth to remove plaque and food debris, water flossing uses pressure to massage the gums and push leftover food from teeth. Water flossing also has several advantages:

However, there are a few disadvantages:

Debate is ongoing as to which of these techniques works best, and there is no right answer for everyone. Many people prefer the control they get from standard flossing. However, both tools clean between the teeth and under the gums, helping reduce the risk of gum disease and tooth decay. Talk with your dentist about which flossing tools and techniques are best for you.

What’s next after a visit to the dentist?

Coverage for every phase of life